Ohhhhh baby!  Well, here we are at my favourite lil spice.

I came across ASAFOETIDA or HING, when I did my first Yoga teacher training in Byron Bay.

It was used frequently in the beautiful meals that were prepared for us, as it is a common substitute for onion and garlic, which were not part of our diet there.

According to Ayurveda, Yoga’s sister science, garlic and onions are considered rajasic and tamasic foods, as opposed to sattvic.  If you don’t know what I’m talking about, click HERE to read Kurma’s essay on it.  I was lucky enough to do a cooking workshop with Kurma, and I’m a fan of his authentic work and delicious food!  But basically, yogans do well to eat a more sattvic diet – which in short refers to certain foods that assist in realising yoga, or a yogic state.

Anyway, while onions and garlic used to be for me, and seem to be for many, the basis of most meals, I now often leave them out of mine, and am happy to do so. While I can tell you I do enjoy how they taste, I am repulsed at how they make my breath smell and taste, even so the next day, the aroma – especially of garlic – lingers!  And in fairness, why stop at breath – they also make for tangy body odour, to which I have a very high sensitivity!!  I’m sorry, but I just don’t like to stink, nor do I like to smell other people’s stink if I can help it!

So for example, I would suggest a ‘private eye’ should steer clear of garlic, it’s like a built-in body app that tells everyone “I’M HERE!”  … within a 5km radius!!  And I’m not pointing fingers here, shur I’m guilty myself from time to time!

But there are other more practical reasons I don’t rush to use these fellas;

1. Garlic often can make me feel nauseous, depending on quantity and how it’s cooked,

2. Both onions and garlic seem to make me a bit bloated and give me an uncomfortable feeling in my stomach, caused by everybody’s at-least-one-time-friend  –  G A S !

I find it interesting that in Western medicine, garlic is heralded as having great antibacterial qualities, but I have read too that it also destroys beneficial bacteria, which are essential to the proper functioning of the digestive system.  So here we go on the merry-go-round again with all the contradicting views and rhetoric about what we should eat and what we shouldn’t … so I’m just bringing it back to my mantra – I mostly eat what mostly makes me feel good.  To me, it’s just about having a bit of self-awareness, or as my mother would say, “a titter of wit”!  Howaya ma!  If it’s gonna give me stomach pains, then I’ll think twice about eating it!  They won’t be on my menu, if I have to, say, wear an unforgiving dress, or share other people’s company in a small/enclosed space!, etc etc!  I think you get my drift (not waft!).

Having said all that, I haven’t cut them out strictly, let’s just say I tend to veer away from them.

The name “asafoetida” is derived from the Farsi (Persian) word “asa” (resin) and the Latin “foetidus” (smelling fetid). Many unusual medical claims have been made for the resin, most stemming from the belief that it’s foetid odor acts as a deterrent to germs.  In my research, I have found comments where some people say they don’t really notice the smell of this stuff!

WHAT?!  ARE THEIR NOSES DETACHED FROM THEIR BODIES???!!  This stuff  S T I N K S !  I do not understand how anyone could not notice it!  It is a most pungent odour that certainly stops me in my tracks!   It is also known as ‘Devil’s Dung”, so c’mon?!  But the cool thing about it is – it doesn’t make ME stink when I eat it!  Unlike the aformentioned!

It’s not just me – there are records that tell us the shock of the sulfurous smell was once thought to calm hysteria, and in the days of the American Wild West, asafoetida was included in a mixture with other strong spices as a cure for alcoholism no less!  Other early records mention that Alexander the Great carried this “stink finger” west in 4 BC.  So it’s been around the block, and for a while! 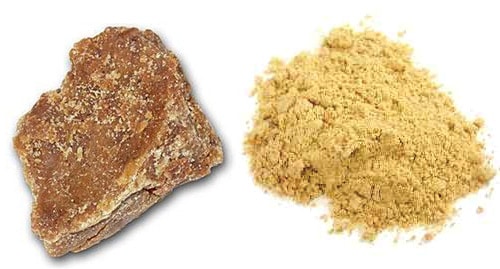 So what is it?

Asafoetida, also known as HING, is a gum that is from the sap of the roots and stem of the ferula species, a giant fennel that exudes a rank odour!  It is grown chiefly in Iran and Afghanistan from where it is exported to the rest of the world. In India it is cultivated in Kashmir.  It was used as a spice in ancient Rome, and although not native to India, it has been used in Indian medicine and cookery for ages.  And indeed in Chinese cooking and medicine.  It is commonly found in Ayurvedic cooking and has reportedly many positive health benefits, especially for the Vata and Kapha dosha..  Which is, of course, why I love it!

In Ayurveda, it is used to aid digestion, cure colic, and stagnation in the gastro-intestinal tract.  Asafoetida burns ama (the sticky waste-product of digestion that builds up in the digestive tract when your digestion is either weak or overloaded with the wrong foods).

In western herbalism, it is used to reduce the growth of flora in the gut, especially candida, directly reducing gas. It apparently has anti-viral properties and it was used to fight the flu during WWI and it’s also been documented that in 1918 asafoetida was used in the Spanish influenza pandemic.

In  Traditional Chinese Medicine it is viewed as entering the liver, spleen and stomach channels. It stimulates the intestinal, respiratory and the nervous system. It can be used for food stagnation, weak digestion, intestinal parasites and flatulence as well as asthma, whooping cough and chronic bronchitis.

It is also regarded in Ayurvedic, Chinese and Western medicine as an effective remedy for worms and other intestinal parasites.

Note: It must be fried before use, as raw and un-fried asafoetida may cause nausea and vomiting.

Other reported Ayurvedic benefits and uses of Asafoetida:

As I mentioned above it is considered to be pacifying to the Vata and Kapha doshas. (Do you know your dosha?!)

It is a powerful antispasmodic – useful in cough, asthma, intestinal colic, and uterine spasms and is nourishing to the nervous tissues in the body.

Asafoetida is also used to treat low libido, impotence, and encourages ovulation and fertility where the uterus is congested from Kapha. Curiously, it has also been used as a contraceptive, perhaps by employing the anthelminthic qualities topically to destroy semen.

NOTE: Asafoetida is abortifascient and should not be used in pregnancy or breastfeeding.

Asafetida is a potent antioxidant, and ferulic acid, a component of the resin, has shown promise as a chemopreventive agent, suggesting that asafetida may offer some protection against carcinogenesis. In vitro studies have shown some cytotoxicity against lymphoma ascites, tumor cells, and human lymphocytes.  Protection against the mutagenicity induced by aflatoxin B 1 has also been demonstrated; however, this effect was only evident against one strain of Salmonella typhimurium and was less than that observed with tumeric and garlic. The mechanism through which asafetida exerts its antitumor activity is unclear. Hypotheses include interception of free radicals, inhibition of natural killer cells, induction of enzymes such as glutathione S-transferase and quinone reductase, and inhibition of polyamine and DNA biosynthesis.

Administration of F. asafoetida conferred considerable protection against chemically induced mammary carcinogenesis in young female rats.  The reduction in the mean number of mammary carcinomas per rat (regarded as the most reliable index of mammary tumorogenesis in experimental animals) was highly significant in rats receiving asafetida as part of their diets (1.25% or 2.5% w/w). Long-term studies showed reduction in the multiplicity and size of palpable mammary tumors, as well as a delay in mean latency period of tumor appearance. The administration of asafetida in the diet did not affect food intake.

Research reveals no clinical data regarding the use of asafetida in cancer.

Some of you will notice that most of the asafoetida products available on the market contain wheat, rice flour and gum arabic.

The handsome product in the picture at the top of this post, is one I picked up when I was in Mumbai earlier in the year.  Out of the few different brands I’ve used, I declare it to be my favourite as it is pure, with no additives, the aroma is super potent and I like that it is hand pounded.  And ok, I like the bloody packaging, but that’s last on the list!  The thing is, I have yet to find a way of acquiring it here in Sydney, so diddums!

I am looking at THIS product though, for when my lil jar above runs out, as it’s certified organic and has no additives.  Also HERBIE”S SPICES  stock their version and there is no added wheat, however the package says it may contain traces of gluten, (less than 20ppm), due to manufacturing practices.  I have used this product in the past and it’s really good.

So that’s it!  I just thought I’d share my super secret special sattvic sustenance spice with you!

I use it mostly in my winter casseroles and stews, in my kitchari and I sometimes sprinkle it in with roast vegetables.  A pinch is plenty as it’s pretty potent and remember – you gotta COOK it! I’ve used it more frequently when there is tummy trouble in our house, and perhaps with blind faith, when there was a sufferer of stomach ulcers.  I’m a strong believer in it’s healing and positive power.

ALWAYS store it in a VERY well-sealed jar or container, to prevent contamination of the flavour to other ingredients in the pantry.  You’ll see what I mean when you get yours!

If you’ve never tried it, why not give something new (yet ancient) a whirl, and tell me all about it!