Today I met these LEGENDS!  Toumani Diabaté & his son and apprentice, Siddiki Diabaté.

They play tonight in Sydney’s City Recital Hall.  Don’t miss it if you have a chance to attend, they are simply superb.

And I’m so glad to see that they are still playing and continuing the centuries old tradition despite what some Islamist group tried to do to music in Mali a few years ago …. Which I’ve reposted below.

Incredible what can happen in this crazy world.  We must keep fighting for good, hey?! …

I came across this article in The Guardian a while ago ….

I am a huge fan of Amadou and Mariam, and Toumani Diabaté, and have experienced their joyful and wondrous offerings live here in Sydney, this is definitely not something that should be shut up.

Rebels’ clampdown on live performances, from Amadou and Mariam to Tinariwen, is driving music underground 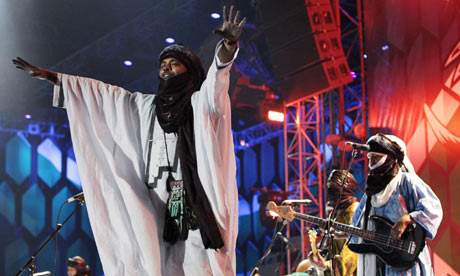 Nowhere does music have a greater social and political importance than in the vast desert state of Mali. It is shocking, therefore, that it has been banned across much of the two-thirds of Mali currently controlled by Islamic rebel groups.

As “Manny” Ansar, the director of the country’s celebrated Festival in the Desert, which has now been forced out of the country, explained: “Music is important as a daily event. It’s not just a business, for it’s through our music that we know history and our own identity. Our elders gave us lessons through music. It’s through music that we declare love and get married – and we criticise and make comments on the people around us.”

Malian musicians have become household names in the west. The list is remarkable, from the late Ali Farka Touré to the soulful Salif Keita, from Toumani Diabaté, the world’s finest exponent of the kora, to the bravely experimental Rokia Traoré. Then there’s the rousing desert blues of Tinariwen, who have performed alongside the Rolling Stones.

There is the passionate social commentary of Oumou Sangaré, and the rousing, commercially successful African pop fusion of Amadou & Mariam.

These musicians, with varied, distinctive styles, have educated western audiences about Africa and their country’s ancient civilisation, and the way in which traditional families of musicians, the griots, had acted as advisers to the rulers and guardians of the country’s history, and kept alive an oral tradition for generation after generation.

And yet the Islamic rebel groups are trying to wipe out this ancient culture – and in the process have forced Malian musicians to examine the role they should now play.

Ansar said he was “ashamed at what has happened has happened – and it was provoked by people who call themselves Muslims, like me”.

When I met him at a censorship conference in Oslo, he said the militias were stopping the music “to impose their authority, so there’s nothing to threaten them”. He added: “That’s why they are attacking the traditional chiefs and musicians. And they’re using concepts of Islam that are 14 centuries old and have never been applied. I find it strange that these ideas are being imposed now. It’s as if they took a computer and wiped the hard drive, and then imposed their ideas instead.”

The situation is particularly painful for musicians from the north of Mali, for bands such as Tinariwen from the nomadic Touareg or Kel Tamashek people, whose international popularity has been helped for the last 12 years by the Festival in the Desert.

There have been upheavals in the region in the past, including a huge rebellion in 1990, when Tamashek fighters turned against the Malian government, demanding greater autonomy, a right to defend and support their culture, and even demands for a new country, Azawad.

It seemed at first that the latest rebellion, now a year old, might follow a similar pattern, yet it splintered and changed course, and Islamic groups took over from the nationalists, partly because the former nationalist leader Iyad Ag Ghali (whose songs were once covered by Tinariwen) has now converted to a more extreme form of Islam.

Tinariwen are currently back in northern Mali, or living in exile in southern Algeria, but when they played in London last year, guitarist and bass player Eyadou Ag Leche talked of their problems since the Islamists took over the north.

Young people have been stopped from listening to music and families have had their televisions smashed for watching music shows, but music was still being played “underground”, he said.

As for the Islamists, he said that he “didn’t know where these people had come from”, and suggested they were financed through Qatar.

Other bands from the rebel areas reported similar problems. Pino Ibrahim ag Ahmed, of Terakaft, said he had been forced into exile in Algeria and “lost much of his land”. He said: “I don’t know these groups, or what they want, and it’s dangerous moving around.” But he was determined to keep playing.

In the Malian capital, Bamako, outside the rebel-controlled area, musicians are also determined to keep working, but face different problems.

Bassekou Kouyate, the world’s leading n’goni player, said that musicians in the city are unable to work at the moment as clubs have been closed, all public concerts have been postponed, there are very few weddings taking place, and “even the concert in honour of the great balafon player Kélétigui Diabaté, who died recently, has been cancelled”.

He said: “The government is nervous and afraid of terrorist attacks on public gatherings. They are asking everyone to wait until the situation in the north has calmed down.”

But he and his wife, the singer Amy Sacko, did take part in a national television programme, along with Oumou Sangaré, in which they “all sang against all forms of sharia law”.

Asked about the French military involvement, he said “they have saved Africa. They have saved Mali from the Islamists. I am going to buy a French flag to put in front of my house, to say thank you. That is how us Malians feel now”.

In another musical unity project, the singer Fatoumata Diawara has just finished a new song and video, Peace, which will be quickly released in Bamako on Thursday. The aim, she said was to promote peace and “show that not all Touaregs want an independent state in the north – we want one Mali”.

Touareg musicians appear on the song, as part of an extraordinary 45-strong cast that features 13 musicians, including Toumani Diabaté and guitar hero Djelimady Tounkara, and 29 singers, including Sangaré, Amadou & Mariam and Ivory Coast reggae artist Tiken Jah Fakoly. “There has never been anything like this in Mali,” she said. “The political situation is bad so it’s time for the musicians to come together.” She also agreed with Bassekou that “people are happy” about the French military involvement.

Outside Mali, other musicians are involved in an international campaign to promote the culture of their battered country. Rokia Traoré, arguably the most adventurous female singer in Africa, is currently on tour in Australia. She explains: “I can just keep going and doing the best in my work, to try to make people think good things about Mali and see good things from Mali.”

There will no doubt be similar sentiments expressed in London and Glasgow on 26 and 27 January when three Malian artists appear together at the Sahara Soul concerts, at which Bassekou Kouyaté will be joined by the young Tamashek band Tamikrest, seen as a younger answer to Tinariwen, and Sidi Touré, a griot from the ancient city of Gao, currently under rebel control.

When those shows are over, Kouyaté heads back to Mali for further events, which will only take place if security allows. A major festival in his home town of Ségou is to be followed by an appearance at the Evening for Peace and National Unity in Bamako, organised by Oumou Sangaré.

Both events will also feature musicians who are also taking part in a two-pronged Caravan of Artists for Peace and National Unity, which will travel around west Africa next month, ending up in the town of Oursi in the neighbouring state of Burkino-Faso.

It’s here that Ansar is hosting his 13th Festival in the Desert, now being staged in exile.

“The brutal sound of weapons and the cries of intolerance are not able to silence the singing of the griots,” he said. “The Festival in the Desert must survive all this.”

• Sahara Soul is at the Barbican, London, on 26 January and Glasgow Royal Concert Hall (celticconnections.com) on 27 January.

Did I mention I love Amadou and Mariam?!